The first whitetail fawn just bobbled across the meadow, close behind mom.  Not a newborn--their first weeks are spent curled up in hiding, rising only to nurse and to test those trembling, fragile legs.  I've nearly stepped on one several times in old disused irrigation ditches around here, but they will bolt away at the last second.  It's always a surprise to see how dark and how red they are, and they're never less cute than ever.

The prairie flora is already changing fast.  The white field chickweed, Cerastium arvense, has disapppeared with unusual quickness, and the mustard-yellow biscuitroot, Lomatium cous, which I've previously misidentified as L. dissectum and which was blanketing the dryest meadows last week, is rapidly turning brown.  It's a plant I damn well ought to know, since its root is a favorite food of grizzly bears in Yellowstone.   The sand-lily, Leucocrinum montanum, was like a field of stars the day of my arrival (June 1st), but low as it is, it's fast overshadowed.  Low larkspur, Delphinium bicolor, isn't low at all this year--I'm seeing great bouquets of them a foot and a half tall.  Maybe I've got that species wrong too.  Anyway it's a great year for it, though indoors it falls apart fast.  The little sunflower, Helianthella uniflora, seems a bit more widely spaced than usual, but it may be just getting going.  Last year--the year of brutal drought--the hauntingly elegant death-camas, Zigadenus venenosus, appeared hardly at all, whereas in the very wet year before that there  were swaths to the horizon; it is just now rising in profusion, though I think it will not rival 2011.  Hairy penstemon, P.eriantherus, a big, bold, pink, almost rudely bulbous thing that grows most happily in the most miserably dry clay and gravel, is a sentimental hero of mine, and it seems to be booming early.  Style onions, Allium style, are more abundant and taller than I've ever seen them--tender leaves coming soon to a baked potato.  Oddly, I haven't seen a single shooting-star, despite all the rain we've had.

Out on the prairie, a few diffident pioneers are showing up close to the ground, under the rain-charged grasses: phlox, pearly everlasting, yellow violets, a low spreading cinquefoil; but the usual bull-goose chest-thumping champ of the farther range, silky crazyweed, Oxytropis sericea, seems a bit on the sparse side.  It is making up for that modesty, however, with a wondrous range of pinks way beyond its customary cream, some of them almost purple.  Its little sister, the small but well-named (in both English and Latin) showy crazyweed, Oxytropis splendens, appears only here and there, lovely in her pink frills like some shy girl at a Jane Austen ball.  My favorite of all, the boringly named narrow-leaved gromwell, Lithospermum incisum, is excruciatingly hard to find but heart-achingly beautiful when at last you do. 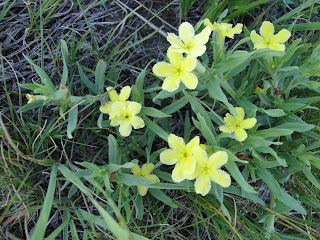 Some bonuses use a mechanical system, such as a spinning wheel, that works aspect of} the bonus to display the amount received. While on-line casino slots are finally a game of chance, many players do frequently win first rate sums and some lucky ones even score life-changing payouts. If you're in it for the 블랙잭 large bucks, progressive jackpot slots will most likely go well with|swimsuit} you finest. This is a jackpot that builds up over time and then pays out a giant sum of cash to a single participant.