Good Thoughts about a Pussycat

(With apology to the incomparable George Booth for the borrowing of his phrase.)  I am trying to dampen my blazing fury at the just-published proposal of the U.S. Fish and Wildlife Service (Barack Obama, proprietor) to remove all federal protection from all gray wolves in the United States except the perpetually persecuted Mexican subspecies.  I will be returning to this subject before long, when I calm down. 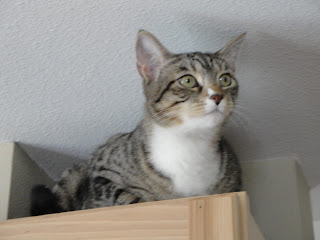 And here is Isabel the esthete, contemplating wildflowers just gathered from the prairie: 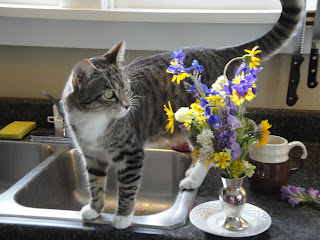 If there were a wolf pack roaming the prairie and the cottonwoods here, might they put the bite on Isabel?  I suppose it's possible, but most unlikely.  This place is crawling with both white-tailed and mule deer, including newborn fawns--much more appealing to the lupine palate.  Nevertheless it should be admitted that even while the wolves' attitude toward Isabel might be indifference, hers toward them would, I'm quite sure, be distinct antipathy--from way, way up in the top of a tree.