In further preparation, I found that this dish is the subject of virtual cult worship in France.  My friend Annie Jacquet Bentley, emailing from the old country, turned me on to the Confrérie des Tripaphages—the Brotherhood of Tripe Eaters—one of those only-in-France organizations fanatically devoted to a cultural obsession, in their case not only tripe but all the abats (offal, the beloved orphans of refined gastronomy): brains, head, muzzle, cheek, tongue, sweetbreads, breast, spinal marrow, tail, udders, liver, lungs, heart, testicles (also known as frivolités), kidneys, ears, spleen, and, supreme above all, tripe; and supreme above all other tripes, Tripes à la Mode de Caën. 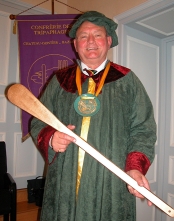 The Grand Master of the Confrérie, M. Jean-Claude Guilleux, is, please note, suitably bedight in ancient costume, including what seems to be a velvet beanbag for a topper and, in lieu of a prince’s mace, a big wooden tripe-stirrer.

This devotion to offal isn’t just a French thing.  The ideals of good gastronomic citizenship increasingly hold that we owe it to the animals we kill to make the most of them—as my father’s and Craig Claiborne’s families in Mississippi used to say of their pigs, to use everything but the squeal.  The British chef Fergus Henderson has a serious best-seller in his The Whole Beast: Nose to Tail Eating, and here in San Francisco Chris Cosentino draws hordes of carnivores to his restaurant Incanto, where beef heart on a skewer is a gentle introduction to the more challenging stuff.

goes back far into the past.  Athenaeus praised this dish.  The father of Greek poetry, Homer, noted the excellence of tripe....Rabelais tells us how Gargamelle gave birth to Gargantua after having eaten a huge dish of godebillios.

The more modern but equally obscure version of that word is gaudebillauds—a local dialect name for none other than Tripes à la Mode de Caën.  For those of you not up on your French literature, Gargantua was a big scary giant in a series of five satirical and quite dirty novels by François Rabelais—so we know that the dish was already held to have magical powers five hundred years ago.

By the nineteenth century France was full of triperies, and most people bought their tripe already cooked.  Auguste Escoffier’s Ma Cuisine, which gives recipes for virtually everything in all of French cuisine, has only this to say about Tripes à la Mode de Caën:

The preparation of tripe in the Caën manner calls for special treatment which it is not always easy to give.  It is preferable, in the circumstances, to go to the people who specialise in its preparation.

Well, thanks a lot, Auguste!  I should note that despite the best efforts of the Confrérie des Tripaphages, there remain today fewer than six  hundred honest-to-God triperies in France.

So to hell with Escoffier.  Henri-Paul Pellaprat and his academy’s-worth of fellow chefs in L’Art Culinaire Français tell us that the tripe of Caën is “the glory of Norman cooking...famous throughout the world,” and I’m damned well going to make it at home.

Following Craig’s instructions, I’ve blanched my calf’s foot, and I’ve soaked my tripe.  Supposedly the latter was going to require several changes of water till it ran clear, but it was clear right away, very nice.

I laid the calf’s foot at the bottom of a heavy Dutch oven (Jean-Pierre Moullé said it would do just as well as his tripière), cut the tripe into two-inch squares, and layered those on top.  Then came a carrot, a peeled onion, a stalk of celery, a leek, and a bouquet garni (bay, thyme, parsley, a clove, peppercorns, a clove of garlic).  Salt, pepper.  I poured in water to cover—some recipes call for Norman hard cider, which would be lovely, but Craig said water and I was trying to stick to his gospel.  Finally, blanching a little myself, I blanketed the whole thing with beef fat.  I brought it to a boil on the stove and then stuck it in a 300º oven.  Because my pot was not hermetically sealed, I did top up the liquid a few times.

Twelve hours later I had one of the most god-awful-looking messes I had ever laid eyes on.

Well, onward.  The big thing at this point was to get rid of all that fat, most of which had now melted down to a glistening inch or more of hot grease sloshing around on top.  The easy way to degrease the dish—which Craig’s recipe never mentions—is to strain the liquid out and leave it in the fridge overnight.  You can then just pop that huge cap of fat right off.

Meanwhile you need to hunt around in the remaining mess for the various bones and get rid of those.  Also the vegetables, some of which will have cooked so far down they won’t be easy to identify.

Add some good aged Calvados to your liquid.  Craig says then to strain it back into the dish through the double thickness of cheesecloth, though it’s hard to see the point of that, given what you’re pouring it into looks like.  Taste, and adjust the seasoning.

“Serving piping hot,” writes Craig, “with boiled potatoes on the side.”  Most authorities counsel a white wine, though cider would be excellent.

And, well, okay, let’s eat.  Boiled potatoes.  A bottle of Vouvray.  The tripe carefully degreased and re-hotted.  The calf’s foot has made the liquid unctuous indeed, but there’s still a lot of liquid, so a spoon comes in handy.

It’s very good.  Very good indeed.  But also a reminder that truly to appreciate a dish like this, to experience the deep-seated craving that brings citizens to form societies of devotion, you have to have grown up with a dish like Tripes à la Mode de Caën, or at least have eaten it many times.  If I were served my mother’s tuna-fish salad—heavily sweetened with pickle juice—for the first time now, at my age, I don’t know how I would take to it.  And do you remember your first raw oyster?

There are a good many reasons this dish is worth the work—one of them being how it links us through the centuries to our gastronomic forebears.  Another is that, strange though it may at first seem, it really does taste good; and in a way that nothing else does.
Posted by Tom McNamee at 3:44 PM

My first taste of this dish was in Bayeux, about 20 minutes west of Caen. At age 65. In 2014. Not having grown up with the flavor, I had no expectations. While others may prefer a white wine, I found that a ripe red from south France was just the ticket. Superb dish. And you forgot to mention the bread. Even after cleaning up all those boiled potatoes, bread is essential for wiping up that last bit of sauce. And thanks for not cutting up the onion. Most recipes today call for that, but from what I have learned, it is not traditional to do so.