This is something I’m writing about in advance because I sense that I will have been changed in some mysterious way afterwards.  The thing is tripes à la mode de Caën, one of the classic dishes of French cooking.  The city of Caën, in Normandy, is famous for its tripe, and for being the resting place of William the Conqueror.

The tripe dish is among those I’ve chosen for Craig Claiborne’s Greatest Hits.  It’s significant in his career because it was one of the first recipes that Craig really challenged his readers with—in the Sunday magazine of the New York Times of December 8, 1957, when he had been working for the paper for less than three months.  He had just begun to show off his wicked wit, quoting this from the Wise Encyclopedia of Cookery: “Tripe, like certain alluring vices, is enjoyed by society’s two extremes, the topmost and lowermost strata.”

“Alluring vices” were a constant theme in Craig’s mind, and life, and he kept them almost entirely secret in those days.  But that has nothing to do with this.

I’m making only a quarter of the amount he goes for in his New York Times Cook Book of 1961.  That recipe calls for four pounds of honeycomb tripe and four calves’ feet.  Even from my very wide-ranging butcher in San Francisco, the Golden Gate Meat Company, tripe and calves’ feet have to be ordered.  When I went to pick up my one pound of tripe and my single calf’s foot, I was stunned: This was no foot, this was a whole goddamned lower leg!  It weighed four pounds, and cost twenty-three dollars.

Contemplating the monstrous thing at home—hoof and all, we’re talking—I felt that something was wrong.  I returned to the butcher, and explained my position.  Sympathetic as they always are, two of the guys at Golden Gate split the leg with their saw, longitudinally, so that the marrow and connective tissue would do their job of gelatinizing and silkifying the sauce; and they kindly took back half, saying they could easily use it in their weekly batch of (superb) veal stock.  They also sawed it in half the other way, so that it would fit in—what?  I still have no idea.  I do not own a tripière.  Yes, of course, the French batterie de cuisine includes a glazed earthenware pot dedicated to the baking of tripe: 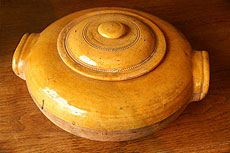 I’ll spare you the rigamarole of prep—a good deal of washing, soaking, and blanching.  You layer tripe and vegetables on top of the calf’s foot and blanket the whole thing with—I kid you not—slices of pure beef fat.  But where the recipe starts to get really, um, unusual is in step five: “Cover the pot with the lid and prepare a thick paste with flour and water.  Seal the cover with the paste.  Bring to boiling point on top of stove, then place in oven.  Bake twelve hours.”  You read that right: twelve hours.

If you’re Craig Claiborne, send Con Ed bill to New York Times.  If you’re housewife in Caën, in nineteenth century, take tripière to neighborhood baker at end of day and leave in oven all night.  If you’re me, or you, make on cold day and prepare for major spike in utility bill.

I’ll let you know how it turns out.
Posted by Tom McNamee at 5:24 PM