Summer's Sweetness on the Sweet Grass 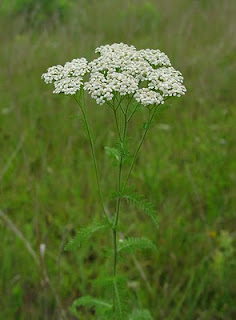 Achillea millefolium, beauty of wilderness meadows and trash-strewn vacant lots from American coast to coast—no, more: of the whole Northern Hemisphere. It is our floral equivalent to the robin, all-summer companion, ever-dapper, ever-cheerful, all too easily taken for granted. Our dear Lauren always makes a point of petting the first yarrow she sees, gently, as if it were a good but sensitive dog. Achilles carried it into battle to stanch his soldiers’ wounds.

The summer’s most beautiful and most fleeting flower has come and is already going: Calochortus gunnisonii, the Gunnison’s Mariposa lily, rising like a risen soul above the prairie grasses. 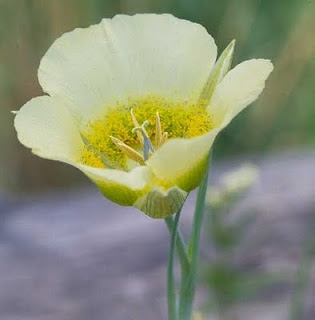 Also a rather rare new bird: the prairie, or Richardson’s, merlin, a low-flying, unbelievably fast small falcon of vision-blurring acrobatic skill, at whose approach all the little birds panic and dive for cover. At least one of them each day must fail to find cover, for they are his entire diet.

The Sweet Grass is finally low enough to fish. On my first cast of the morning, about ten o’clock, of a little bead-head hare’s-ear nymph, I hooked and landed the biggest trout I've ever caught in this creek, a prodigious brown, twenty inches, a good pound and a half, with a great hooked jaw—the signature of an alpha male—and skin of blazing gold. He was tired, and hung panting as I held him till he had his breath back, and then shot away into the green deep.

The pool was newly scoured out by this spring’s ferocious runoff, basically the new home pool, straight across from the little one-board footbridge that takes me from the house over an irrigation ditch to the creekbed, which now looks, misleadingly, like a scene of devastation, with towering black-and-white logjams of burned and bleached cottonwood trees and limbs washed down from the 2007 fire. The logjams and all the débris they have caught have played havoc with the old channels. Just here, once the water was falling and no longer a single all-drowning sheet, there were five channels, each essentially new, braiding in and out, smashing into the jams and one another, purling back on themselves, grinding out cutbanks deeply enough to uproot tall trees, which now have fallen into the creek (their leaves still green and fluttering) to found further logjams and yet more new channels, convergences, islands, rockbars, beaches, mudflats, riffles, rapids, backwaters, standing waves, sluices, vortices. Each has its own contending voice: You turn your head this way and that and every degree of rotation composes a different chorale. The rushing shallows are hunting grounds for great blue herons, ospreys, bald eagles.

I have been trying not to think about Craig Claiborne, but it’s impossible. As though compelled by his ghost, I bought a big, gross, pimpled beef tongue, boiled it, skimmed the grotty stock, peeled the now gray and rigor-mortised upper surface and tip, carved off the tendons and unnameable attachments of the underneath. With store-bought—but organic!—beef stock and vegetables and a fresh for-the-purpose bottle I made Madeira sauce. I sliced the meat, braised the slices, didn’t like the sauce’s thin consistency, made a roux, overthickened the sauce, forgot to add the final schplup of additional Madeira, and, oh, to hell with it, voilà, langue de boeuf à la madère. I considered myself lucky, in Montana, to have found a langue-loving guest in my neighbor, fellow Greater Yellowstone Coalitionist, and longtime pal Farwell Smith, who lived in New York in the glory days of Le Pavillon, when sauces were almost as thick as the glop I put in front of him. On rice, by the way, not the mashed potatoes I had had in mind but was unable to produce owing to lack of potatoes.

Farwell kindly brought a bottle of Columbia Crest cabernet, from Washington, which tasted just right with the tongue, but Lord, Lord, why must these American wines be so goddam thick? Well, anyhow. For dessert—I don’t make desserts, especially baked ones, those are Elizabeth’s domain, but damn it, she’s not here, is she?—I attempted a clafouti aux cerises, a recipe for which had been in some online newspaper or other a couple of days ago. I was encouraged to give it a shot by the facts that 1) greatly to my surprise there is in this generally under-equipped kitchen a cherry-pitter and 2) I had some very good cherries. It’s easier than pie. You pit your cherries, you make the world’s simplest batter (flour, eggs, sugar, vanilla, milk, salt), you melt some butter and sugar in a frying pan, throw in the cherries, cook ’em a little, pour on the batter, and bake the thing brown and that’s it. Bam. 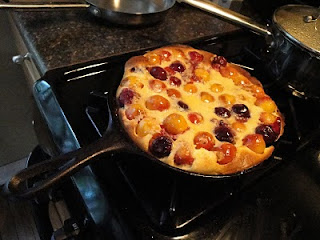 Thanks for your squeamishness about the tongues underhang and the rouxy sauce and the reluctant but divine clafoutis from some newspaper... Real cooking is so imperfect this way and that's why it's lodged in our memories so sweetly and why the magazine version of this same story seems so tiresome.