And melancholy so intense it shades to grief.  The day is right: hot and still, the air alive only with big fierce mosquitoes.  The Sweet Grass is down, doubtless robbed of far more water than the irrigators are entitled to; nevertheless this year the creek has formed a few long runs deep enough for good fish.  They've had little botherment from me.  Yesterday I forced myself to go fishing and caught one brown about three inches long, then quit.  This morning I couldn't be forced, it was already too darn hot at nine.

The nights have been my kind of air.  Last night was the first time I've been sure that the great horned owls are back.  After the fire of 2007--or more probably after the logging that followed the fire--the pair that nested very near the Langston House had disappeared.  We loved those loud deep hoots and the louder chirrups of the youngsters, who were always getting separated around the meadow and across the creek and calling to each other, "Where are you?"  "Here!"  "But where are you now?"  "I'm over here now!"  Last night the moon was one crack short of full, tonight it will be in its maximum glory, and not a cloud is expected.

Just off the driveway is a dead calf.  I had smelled it for a while but hadn't gone looking because it was in the swamp.  By last night enough other critters had trampled the tall grass down enough to make a looking-path, and yucko.  It looked as if the head was gone altogether, though it seems more likely to me that it's just folded under--nobody eats the head first.  Much of the shoulder and neck, however, were thoroughly eaten away.  I had heard coyotes singing a few nights before, far out on the prairie, but somehow this didn't look like coyote work, nor bear: The hind leg was untouched.  Hard as it is to believe, I'm thinking that all this gobbling has been done by the maggots.  I have not seen or heard a single raven, which seems very odd.  A few years back there was a whole dead cow from far from the same spot, and the half-dead cottonwoods nearby (and we've still got plenty of those) were festooned every day with a whole funeral chorus of those great birds.  We have, of course, golden eagles here, and occasionally turkey vultures, and bald eagles--and why haven't I seen any of them in the sky above this feast of veal tartare?

Melancholy has been well aided by Truffaut's "The Last Metro," one of the most perfect movies ever made, with Deneuve and Depardieu at their most sublime.  The ending comes at you like a speeding but silent train, and I burst into helpless tears.   Can anybody tell me that they have ever seen a woman more beautiful than Catherine Deneuve?  Or a more powerful actor than Depardieu?  Too bad he's gone nuts over taxes.  That seems to happen to more than a few geniuses, doesn't it?

Elizabeth has come and all too quickly gone.  At least, when she was here, we were able to get at Porcupine Butte two different ways.  The first was up its flank to a bench we'd never known the existence of, a flat shelf covered with limber pines, nearly all dead, and one thriving Douglas-fir.  I wondered if maybe the living limber pines might be immune to both the mountain pine beetle and the blister rust, and if it and its kinsmen might therefore found a new population.  I wondered if the same thing might be going on among their more important close cousins, the whitebark pines, which have historically been the single highest-calorie source of food for Yellowstone grizzlies.  I've gotten in touch with a researcher who's looking into the Yellowstone whitebark situation, but haven't read her papers yet.  She did say she didn't think it was quite as much a crisis as people have made it out to be.  Good thing if so, since the spawning runs of cutthroat have been slashed by ninety percent by the lake trout introduced by some fool to Yellowstone Lake, and the supply of elk calves is down too (thanks in part to wolf predation--oops).  Well, I digress.  The point was this new place on the butte.  We decided to sidehill south along the face of the butte, but instead hit a gorge--which we'd also never seen.  It was unquestionably impassable, for people.  Across it we saw two blonde coyotes scrambling up the wall, followed by fuzzy, stumbling cubs.  I saw only two, there may have been more.  One of them turned and looked at me for a long moment, one of the cutest, biggest-eyed, biggest-eared little puppy dogs I've ever had the pleasure to see.  I don't think it had ever seen a person before.

(I'm just realizing I've already written about this.  I don't care.  Or, if you prefer: I'm sorry.)

Then a few days later--July 7, 2013--we did our regular route to the summit, up the long, rising grassy slope from the west--and oh, such flowers this year!  I believe we recorded something like forty-five species in bloom.  The weather was perfect, and to be granted such beauty and tranquility, we must always be deeply conscious of our good fortune.  At these times it's good to think about the proportions of what's what in one's life.

Meanwhile, nearly every day, another source of gratitude: cat Isabel.  We now have a regular walking route (in addition to others), which is officially known as the Special Walk because at the turn-around point is an old, old, gnarled, but not very tall willow tree--her Special Tree-- in whose branches she can climb and twist and peek out at me and be a little mischievous--though she always comes down when I ask her to.  Here is a picture of Isabel taking me for the Special Walk. 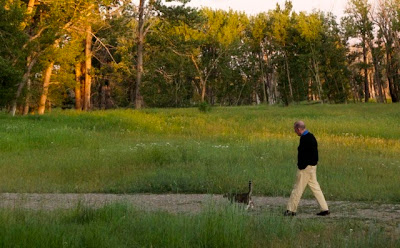 I wondered if Isabel were going to make some sort of parting gesture here, and she has done so.  She came racing in this morning with a tiny dark bird in her mouth, dropped it at her plate, and when it skittered across the kitchen between my legs she shot through the same wicket and bit it hard.  I told her to take it outside, and quite to my surprise she did so directly--trotted right out the front door.  I followed.  She dumped it in the lawn, and when I went to look, it looked to me like some tiny little wren.  Maybe it was a Western wood-pewee, of which there are a lot here, but the tiny body (two inches max) and relatively long, pointy, turned-up tail said wren.  (The bird book is packed and gone.)  Isabel gave the body a bop and to both her and my astonishment it took off flying--landed on the BMW's windshield wiper.  Isabel flew right behind it, chomped it, brought it back into the yard, and dumped it again.  No further flying.

Tomorrow she gets locked in her box and I in mine, and off we go, to pastures new.