When did this start?  I remember the Gotham Bar & Grill in Greenwich Village in the middle 1980s putting out vertiginous assemblages that fell down at first touch.  Alfred Portale’s food managed to be delicious nevertheless.  For a long time in my neighborhood in San Francisco there was a tiny place called Café Kati that was best known for its ready-to-tip architectural craziness, and even there things tasted pretty good in spite of the silly stacking.  The idea, presumably, was that if you could slice down successfully through the layers you would have a pleasing, perhaps surprising combination of flavors and textures.  The problem was that when the whole thing collapsed, as it always did, that was impossible.  It was like one of those absurd Dagwood sandwiches that only Dagwood Bumstead has ever had a big enough mouth to get a comprehensive bite of.

So today, up here in the nowheres of Montana, I’m reading the San Francisco Chronicle online, to wit, Michael Bauer’s review of a new restaurant owned by the well-known coast-to-coast restaurateur Charlie Palmer, whose other places have nearly always been both critical and popular successes, which baffles me.  Aureole, his flagship in Manhattan, always seemed insanely expensive for the quality of the food—it looked good but didn’t come together (perhaps a definitional description, now that I think of it).  His great-looking Dry Creek Kitchen in Healdsburg, California, has the same characteristics—handsome food that doesn’t taste like much.  Bauer seems in general relatively sympathetic to stacking, but in today’s Chron he writes of Palmer’s new Burritt Room that the “cornmeal-crusted oysters ($16) were poorly fried and quickly became sodden atop fennel slaw.”  Now why, I beg you, would you put fried oysters on top of the goddam slaw?  Put your fried oysters on a nice hot plate and your slaw in something else, preferably cool, maybe a little bowl, and you have one of the world’s fine combinations.  Put 'em together and you have—sodden.

In the Ninth Arrondissment of Paris there’s a superb little restaurant called La Carte Blanche that seems to get the stacking thing gloriously right.  What they do is simple, unfussy, and logical.  Here’s a prime example, a recent fish dish: 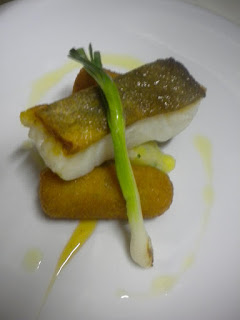 So obviously there’s nothing inherently wrong with stacking: If you can actually get a bite in your mouth and its tastes good, great.  But crisp fried oysters on top of wet slaw?   Bleah.
Posted by Tom McNamee at 9:37 PM